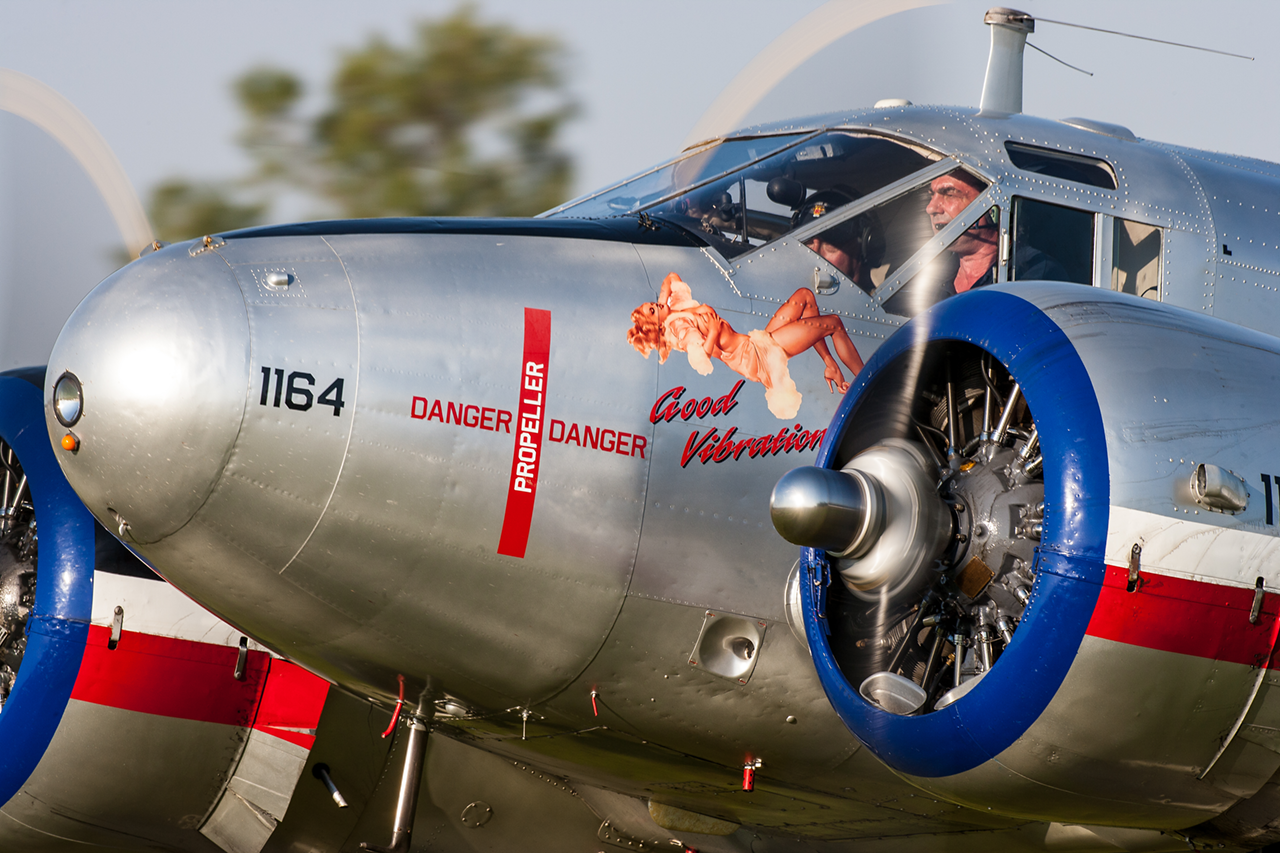 Sunday 25th August 2019 saw the 27th annual Little Gransden Air and Car Show. Little Gransden is located between Bedford and Cambridge in the heart of the English countryside.
The show raises funds for local and national charities in the UK. Over the years the show has established itself as small but perfectly formed and often pulls in big draw aircraft. Little Gransden is a family show with plenty of attractions for all ages. The flying programme covered over five hours of displays from a wide variety of aircraft, both warbirds and civil, with The Tigers Army Parachute display team getting things started.

The Warbird displays included Hawker HURRICANE MK1 V7497, a veteran of WWII, lost in combat on the 28th September 1940 over Kent.

There were a couple of cancellations, notably the Boeing B-17G Sally-B and the Rolls Royce Heritage Flight Supermarine SPITFIRE PR. XIX. The Warbird displays included Hawker HURRICANE MK1 V7497, a veteran of WWII, lost in combat on the 28th September 1940 over Kent. The remains were recovered in the 1990s and a painstaking rebuild followed using as much of the original aircraft as possible. It returned to flight in 2018 and is beautifully presented in its origin markings. Later in the day a Hispano HA-1112 M1L BUCHON would also display, the closest aircraft in today’s line up to an actual Bf-109, the type that shot down HURRICANE V7497 over Kent. The HA-1112 was built in 1958 in Seville / Spain under licence, fitted with a Rolls Royce MERLIN engine. It served as C4K-105 before being placed in storage in 1965. It was recovered from storage to take part in the 1968 movie The Battle of Britain when it and other Spanish aircraft flew to the United Kingdom (UK) for filming. After this it moved to Texas and was again placed in storage. In 2017 it was transported back to the UK for restoration. Flying now as White 9 the mount of Edmund Rossmann in September 1941. He flew in the Battle of Britain before moving on to the Russian theatre where he was captured by the Russians after landing behind enemy lines to rescue a downed pilot. He was credited with 93 victories and survived the war. He died in 2004. This was the only Axis aircraft in the display but we did have a visiting Buecker JUNGMANN  G-BJAL in Olympic livery. A training and aerobatic aircraft that help form the Luftwaffe and prepare a generation of pilots for war.

The other classic British warbird displaying today was the Hawker SEA FURY T.20 WG655 operated on the air show circuit by the Norwegian Spitfire Foundation and based at Duxford with the Aerial Collective. Delivered in 1951 and placed in storage until being purchased by Hawker where it was converted to target towing configuration (TT) then moving to Germany to serve in that role. Returning back eventually to Yeovilton in 1976. In 1990 while serving with the Royal Navy Historic Flight the aircraft was forced to make a wheels up landing resulting in severe damage. The wreckage was disposed of and ended up being purchased by Chuck Greenhill who commissioned the rebuild in 1993. Acquired by the Fighter Collection in 2008 it arrived at Duxford in 2009. The Bristol CENTAURUS engine was replaced with a Pratt and Whitney R2800 and the propeller replaced with one from a Grumman Guardian. The last of the British Navy propeller fighters the type did see action in Korea where a SEA FURY shot down a MIG -15 and in Cuba where Furies defended the beach during the Bay of Pigs invasion.

Miss Helen is owned by Robert Tyrrell and based at the Aircraft Restoration Company at Duxford.

Allied warbirds were also well represented with a Republic P-47D THUNDERBOLT (Jug) presented in the markings of 549192 Nellie and the North American P-51D MUSTANG in the markings of Miss Helen. The THUNDERBOLT was produced in 1945 but little is known of its USAAF service. In 1953 it was one of a group supplied to the Peruvian Air Force where it served until 1967. Six of the group were returned to the US and placed on the civil register. Damaged in 1980 a restoration was undertaken. It changed hands and that eventually led to the aircraft ending up in The Fighter Collection in 1984 and arriving in the UK in 1986. Since then it has moved back to the US and then again back to the UK where it is based at Sywell in Northamptonshire and operated by Aviation Engineering Limited. Miss Helen, the North American P-51D MUSTANG, saw service in WWII with the 352nd Fighter Group and has several confirmed kills to her name. Also serving with the Swedish and Israeli Air Force. Miss Helen is owned by Robert Tyrrell and based at the Aircraft Restoration Company at Duxford.

Another allied warbird flying today was Yakovlev Yak -3UA G-OLEG. Assembled in the 1990s it is designed as closely to the original as possible. A collaboration between the Yakovlev Design Bureau,Strela and Flight Magic, Santa Monica, California. Owned and operated by Will Greenwood at Classic Warbird Displays and presented in the scheme of Squadron Leader Louis Delfino CO of the Normandie-Niemen Free French Squadron in 1944. As no Klimov engines were available G-OLEG is powered by a similar sized and water-cooled Allison V-1710. The Battle of Britain Memorial Flight (BBMF) were present with the Douglas C-47 DAKOTA III display. Training aircraft were represented with two aircraft from T6 Harvard Aviation, HARVARD T-6IIA GTSIX and HARVARD T-6 4 “Wacky Rabbit” G-BJST.

Display teams were on hand too for fun flying with the Turbulant Display Team undertaking limbo runs, balloon bursting and flour bombing and the Red Sparrows flying the 4 de Havilland DHC-1 CHIPMUNK.
Luxury and elegance were covered by a pair of Spartan Executive aircraft in formation with a Beech 3TM {model 18}. The Spartans were N17615 and N17633. The Beech G-BKGL was built during WWII and refurbished before being passed on to the Royal Canadian Airforce (RCAF) in 1952. Now owned and operated by Radial Revelations, the Spartans were displaying to the home crowd as they are both based at Little Gransden. Visiting from The Shuttleworth Collection was the equally elegant de Haviland DH.88 COMET.

Mark Jefferies went on to display in the evening with airborne pyrotechnics as the sun set, quite a spectacle

Aerobatic action courtesy of “the Global Stars” team with 3x Extra Plus 2x CAP232 and further displays from Mark Jefferies with the little and large segment of his Extra 300/S displaying with a remote-controlled model Extra 300 in the same livery. Excellent flying from both pilots. Mark Jefferies went on to display in the evening with airborne pyrotechnics as the sun set, quite a spectacle.
Solo aerobatics were also provided by Pitts Model 12 G-MXII flown by Peter Borchert who also built the aircraft.

VERDICT: In conclusion I would have to say the team at Little Gransden delivers a great family show with enough entertainment on the ground for most folk and enough display aircraft to satisfy the aviation enthusiast alike. Well worth the trip and worthy of putting into the diary for 2020!
Our thanks to Mark Jefferies and Dave Poile for producing a great display line up and the team of volunteers supported by the Marshalls from North Weald. A special thanks to the media liaison Darren Harbar for organising the media access for the event.